I both recorded and transcribed this post. To listen to it click here (there is wind noise, but you’ll hear me tell the story – up to you if you can put up with the wind:

Well today I’m gonna – I’m going to think out loud and record this, and hope it’s not too breezy. See sometimes I walk and then I think things when I walk, and then I try to hold on to my thoughts and sometimes write them down. But something just happened and it was so nice and I thought I have to say it. 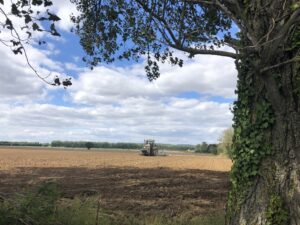 So I  walked across the fields, and they are really nice fields and one field, that is just on my right at the moment, used to be a cabbage field and now it has just been ploughed for whatever’s next. I don’t know what’s next. And on the other side there’s potatoes and they’re not done yet- but they will be soon. So if you keep going across these fields and across another couple of fields, you get to the edge of the sea – but it’s not the sea like a beach. It’s the sea with groves of trees and there’s this one little grove of tress and it’s, um, they’re oak trees. And they must be old – they’re not old, old, old, but they’re quite old – and there’s this one tree, and it’s really nice, and it has these big, fat branches and they’re right low to the ground (some of them) and you can climb up it. I can climb up it, and I really like that. And then you can sit in it. There are all different places – you can sit in one place, you can lie down in one place, and today I climbed up a bit higher than I’d gone before – because there’s a lying down place, and I went higher than that and then there’s a sitting place.

(well they sort-of could) but then I thought, after a while of thinking and sitting and looking, and I took a few pictures – which I’ll put, that ok, I’d better get down, because I need to get home, sometime. And, then this couple walked by.

Ok, back to it…  So I was climbing down and I’ve got a bright red shirt and flowery cottony trouser things on, so I don’t look like a tree, don’t quite blend in, and the man noticed me, and the wife then looked up and noticed me. What do you say? Hi, I’m a grown woman in a tree – no, but the man sort-of smiled and said nothing in a very British way, and the woman said ‘that looks kind-of fun.’ And I said, ‘Well it is. It’s very fun and it’s actually a really lovely tree.’ -and in an equally British way I said ‘It’s one of my favourite resting places along this walk.’ -you know, like I don’t really need a rest, but it was a nice thing to say. And I smiled, and I walked on a little bit, and she walked on, and then she said, ‘I think I might go sit on that tree.’ !

And I thought !!! (inhales excitedly!) She’s going to sit on the tree! – and so I stopped, and I looked, and on one of those big branches low to the ground she was sitting there, looking out at the water, with her back to the path. ❤️ and it was wonderful. And then, her husband joined her – and they were both sitting there.

So I crept up, quite softly (I can do that) not too close to intrude, but I took a picture. And it doesn’t show their faces, and I don’t know who they are, and I hope they don’t mind, but it was such a nice moment, 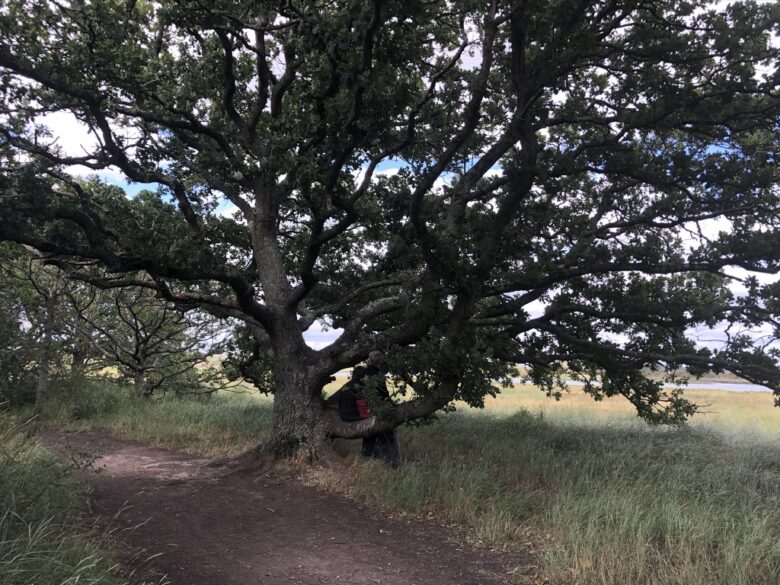 and I felt a genuine ‘human happy’ that actually is missing nowadays sometimes with the lack of interaction, but this was a funny sort of sharing that didn’t involve any touch and a few words only – and I don’t know who they are, but I think both of our days were a little bit brighter for it.

Ok, I hope you can hear this through the wind. I’ll transcribe it…

I love that all she needed was that suggestion, and him too… somehow I doubt they would be sitting there on that tree if they hadn’t come upon me halfway up it first. 🌸