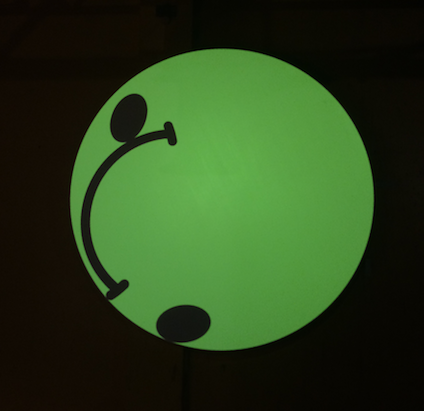 Two years ago today, my daughter and I went to Banksy’s Dismaland. We were so very excited. We had waited for the moment tickets were released and fortunately got two. On the day of the event, we got up early early and booked a parking place in someone’s driveway and made the long drive to the dump of a site. The whole day was in itself an art instillation, some twisted fairy tale- that we were so excited, that the drive was 3 1/2 hours, that we were going to a dump (created intentionally that way)- it wasn’t just about the art.

Once there the experience was oh so Banksy, and looking back, in the light of the world at the moment, and especially recent events, it is so very ironic. We waited in the queue for the park to open 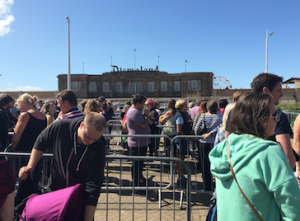 and as we entered we were searched, like others (with extra-effective paper tools). I was held back because I was smiling. I had to stop it. Dismaland, not happy land. Stop the smiling, they told me. Stop it. It took time, but I did, and they let me through.

Once inside, there were games: topple the anvil, and pick-a-duckie (out of the oil slick with a curved picture hook that didn’t really fit in the hole) and there was music… Music with a message. 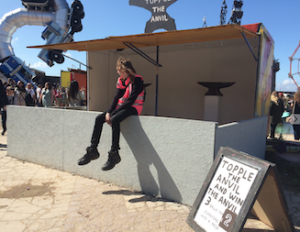 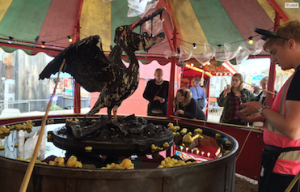 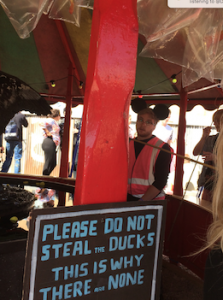 The loudspeaker had announcements that interrupted the Hawaiian sounding music that said things like ‘you are a product of the system’… I have this one recording:

I wish I had more recordings of them, and ironically I did, but my phone broke on the way home from the park and most of the pictures and videos were lost. Truly dismal.

From the provocative to the slightly grotesque, 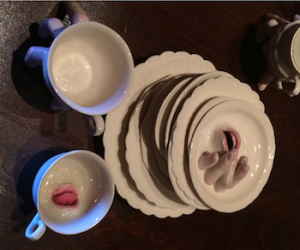 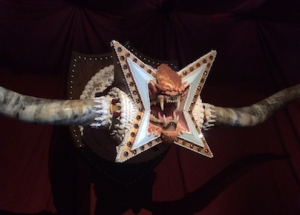 there were inspired works of art, and then there were those that challenged society, not by doing anything in particular, but giving voice and saying blatantly obvious things. The rich the poor, the oppressed, the different, from things that seemed quite far from home, to those that could be mistaken for normal – certainly by many, especially the children: 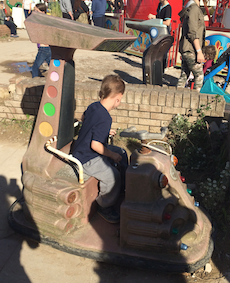 Broken and rusty, these were no playthings, but heck? Move along, nothing to see here…

The messages were, and still are, powerful: 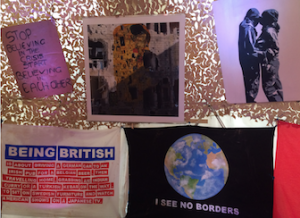 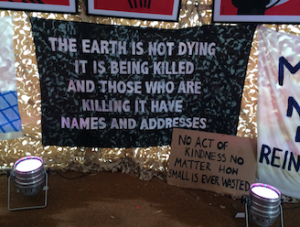 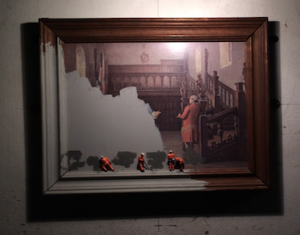 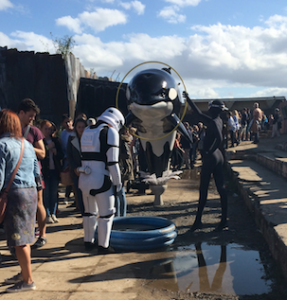 The whale and black suited figure were a fixed installation. The storm trooper was a person, who walked by and gave pause to look into the paddling pool. Every aspect of the park pushed people to think about things that were typically swept under the carpet. 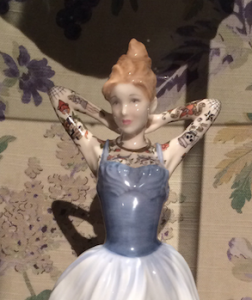 I particularly liked this painting by Laura Lancaster: 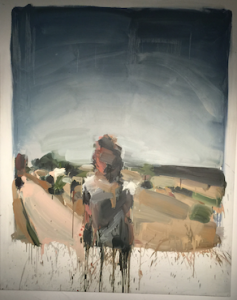 She paints people who are unknown, unidentified, from found photographs. Of all the art, this one moved me the most.

As the sun set on our Dismaland experience, 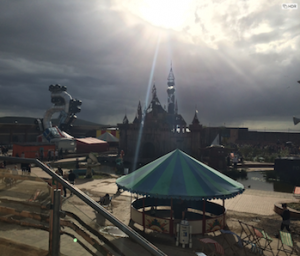 my daughter and I persevered and stayed with one game for at least an hour, (we could only really play once or twice because we hadn’t thought to bring money) until we won. It can be done, even through the muck. We won a goldfish(finger), as in a paper cut out of a fish-finger, in a plastic bag, and she keeps it to this day as a remembrance and reminder. 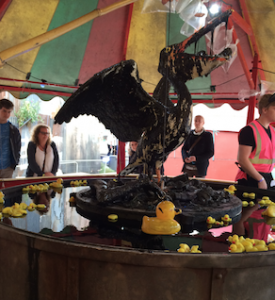 On the way home we stopped to visit Stonehenge, but it was closed. How can they close rocks in a field? Never mind; it was dismal, and we would remember it for years to come. 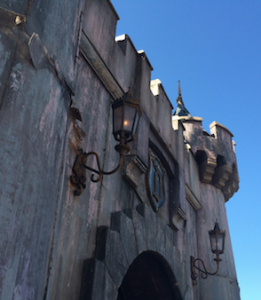 ps In case it is unclear. I loved every minute of it and wholly approve of giving voice to unspoken themes in ways that impact people and inspire them to positive actions.