Applied imagination: Are the walls real? 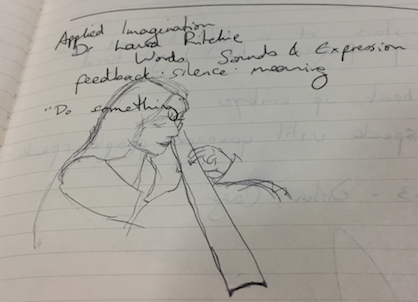 Last week I had the privilege of teaching on the Applied Imagination module at the University of Warwick. Imagine, a two-hour session in a studio that was a copy of where performers stand in a play, with lighting rig all around, a catwalk above, black brick walls and everything that makes a stage – except the audience. What a setting. This was our stage.

The class consisted of 18 from across the different disciplines offered at the university, and our session began with a recap from them (for me) of their understanding of working within a discipline and branching out to cross-disciplinary, inter-disciplinary and even trans-disciplinary. They used the analogy of boxes. (I thought of shoe boxes) One discipline stays within the box, cross jumps from one box to another, inter uses the boxes to make a linked fort-type structure, and trans- that’s when I piped up and joined the discussion with the analogy that you just tip all the boxes out and make a pile in the middle.

This class was like that – we were a mix and were all together. I didn’t even introduce myself beyond: Hi, I’m Laura. They had all read the chapter ‘Whole Students’ from my book, and so they did know something of me. I didn’t need to be put into any other boxes. I began with telling them that when thinking of all these boxes – oh there are so many boxes, in life, in education, in people’s expectations of us, the list could go on – when thinking of these boxes, the walls aren’t real. Are they?

(gosh that was heavy. Did I really say that?!?)

Of course the walls are real, but very often they are built by people and sometimes even built by us. That was something to keep in mind, in the background as we went through various activities and discussions. The overall themes were: 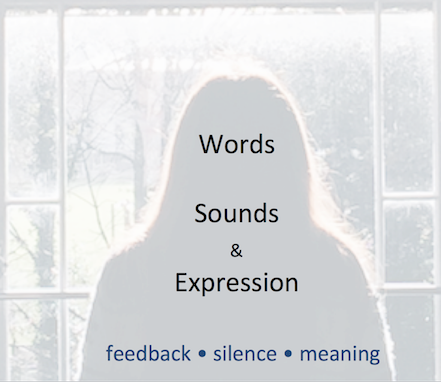 Everything we would do would be to consider process, how we communicate, and to hone our skills with the different components. Let me give you an example, in music there are basic elements: pitch and rhythm, and how they are arranged and interact can formulate amazing things. The expressive possibilities are endless. In day to day communication people use words, but seldom consider the components of how they speak and communicate. Without imagination, words are simple

characters on a page.

When we listen to words, see words, feel words, they have many more qualities. I took the qualities and separated them out to treat each individually. One activity challenged the way people think about expression. People listened to me playing the cello – some unaccompanied Bach – and they were asked to make a representation of it. The only preface I gave was that if they were using lined paper, I was sorry that they had the imposed suggestive restriction of the lines. In this activity words were not required, but it was interesting to see how many people did use words – words are our default. I wanted to break down the walls of words and see what else we meant. To use our imagination a little bit and free up our thinking.

We work to teach people to use words to describe things, but are they enough? Words can so easily get it wrong or be misunderstood. This was what one person wrote about my playing.

It does not say my music was ‘but flow’ but beautiful. (Gosh, what a difference!) and it was written by a 6 year old striving to communicate with words. Even Plato, in his 7th letter, tells us that words are not adequate to convey the meaning of something.

Further, on account of the weakness of language, these (i.e., the four) attempt to show what each thing is like, not less than what each thing is. For this reason no man of intelligence will venture to express his philosophical views in language, especially not in language that is unchangeable, which is true of that which is set down in written characters.

I used the analogy of a disco ball. Imagine words to be individual mirror tiles. We can describe many aspects, but cannot create a whole picture, certainly not one that can be viewed at any one time.

Someone else in the class, Roxanne Douglas, drew the picture with words at the top of this page. It is amazing what talents and expression come out when we are allowed. (that word came up more than once in discussion – and whatever blocks being ‘allowed’ is one of those man-made walls… just saying)

We explored the use of words – describing everyday things and having others draw them. This was a much more comfortable activity, as who can’t describe a toothbrush? -but one ended up looking like an early map of the solar system. Many giggles happened during these drawing and describing efforts.

We explored the spaces between sounds – experiencing silence, even the music of silence:

and then exploring what the composer had to say about it. It is not about ‘silence’ at all, but about the underlying, ever changing sound that does exist, as silence is really so hard to come by.

We considered the mingling of these different components – sound, silence, and seemingly ineffable expression. I did give them help and toys, well not toys, but instruments! In groups people had to decide how to use sound, word, and gesture/movement to convey a something – an idea, a phrase, a something to the rest of us, and they had 5 minutes to plan it.

The outcomes were thrilling. One group had one person playing slightly awkward long scrapey notes  on the open string of the violin while three students sat in a row, holding notebooks, sighing. They tapped pens audibly on the notebooks and in turn said ‘bored’, ‘not listening’, ‘tired’, and the dragging violin sound persisted. It was brilliant! (I guess you had to be there, but it really worked) Another group had one person playing manic fast high notes on the violin while someone spoke in an almost radio-presenter voice repeating ‘DESPERATE’ as if it was an imperative command. Meantime someone was hurriedly drawing something on the white-board and the fourth member of the group was jitter-dancing on the spot, as if standing on hot coals and trying to mimic the shape of a flame. -they were communicating the need to go to the loo! -and the drawing was of a bladder that was filling up. Again, brilliant.

There were, of course, more groups and they were all very inventive. The idea was that whatever they communicated would be more fully explained than by using any one element alone- they were to make the different aspects of communication integral. I love this poem/reflection by Tereza Stehlikova on a conversation with John Berger. She paints wonderful images of sounds and silence with words in time.

My idea was to convey that

allow for conversation between people.

Going back to the initial analogy of shoe boxes and walls, conversation and clarity are essential within disciplines, across disciplines, and especially in teaching and learning – which we do in formal education, and in life. It can be so helpful if we can learn to see beyond the walls. It takes practise, and imagination.

Here are some moments from the session when the instruments came out: 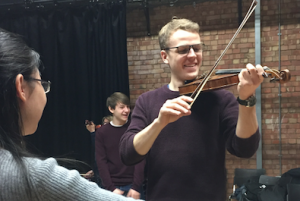 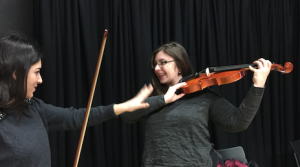 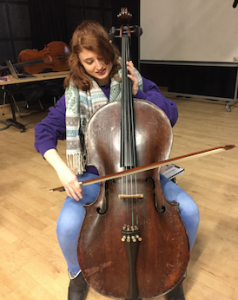 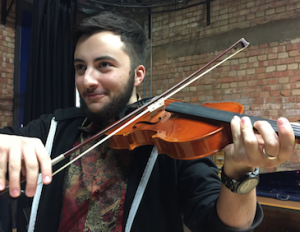 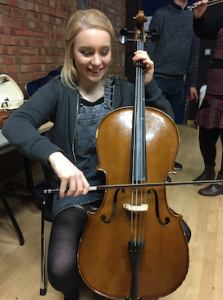