For International Girl’s day: the daughter who stood up to the sea god 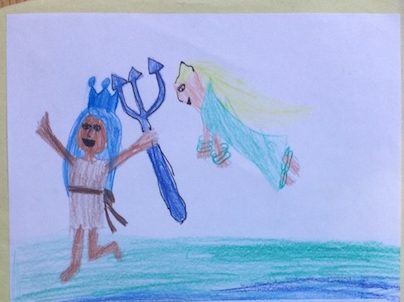 I didn’t know there was an international girl’s day until today, and it is perfect for this post. It is dedicated to all the girls out there. Clearing out a cupboard under the stairs, we found some old school work from a long time ago when my daughter was 8. I handed the pile to her and asked if it was to keep or to recycle. She brought me one of the pieces over the weekend and showed me a spiral bound story that she had written. It had a picture of a winged girl on the front, and she said she thought it would be a sweet fairy tale, (the school brief inside the cover was to invent and write a creation type story about the ‘Sea God’) but instead she made her story about a child calling out racism! GO GIRL! It gives me great hope to know this is what she was thinking back then. 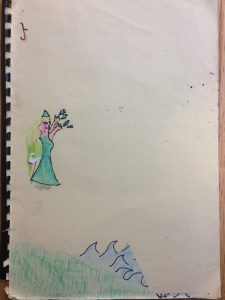 In light of the world, the seen and unseen pressures that people face, the troubles people are unwillingly born into because of their race, creed, or physical place in the world – I often feel the need to share some good things. It is what I can do. So this is one of them. It was my daughter’s invented story. The themes are ever important today-

I am so pleased she wrote it, and am so pleased that her wise school encouraged her to get ideas onto paper and let them flow. You’ll notice there is NO RED PEN on it – instead there are sweet phonetic spellings. She did fix her spelling, but that came in time, and without having to stand in front of a class and write words on the board or any such thing.

Here’s the story of Amira, Sntainai, and Zaka the sea god:

(I have kept the spelling true to text, and put in explanations where you might need them) 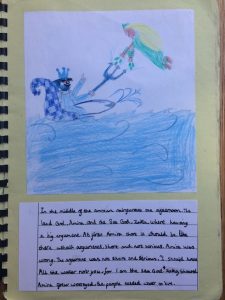 In the middle of the amzan (Amazon) rainforest one afternoon. The land God Amira and the Sea God Zaka were having a big argument. At first Amira thort (thought) it whould be like there ushall (usual) arguments, short and not serious.Amira was wrong. The argument was not short and serious. “I should have ALL the water not you, for I am the sea God.” Zaka shouted. Amira grew worreyed, the people needed water to live. 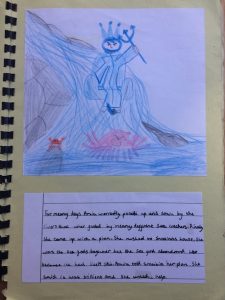 For many days Amira worredly paced up and down by the rivers that wher garded by meany different sea crechers (creatures). Finaly she came up with a plan. She rushed to Sntainia’s house. She was the sea god’s daughter but the sea god abandoned her because she had black skin. Amira told Sntainia her plan. She said it was brillient and she would help. 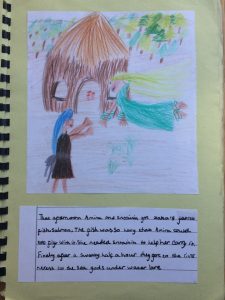 That afternoon Amira and Sntainia got Zaka’s favret (favourite) fish, salmon. The fish was so hevy that Amira could not fly with it. She needed Sntainia to telp her carry it. Finaly after a sweaty half a hour they got to the river nerest to the sea gods under water lare. 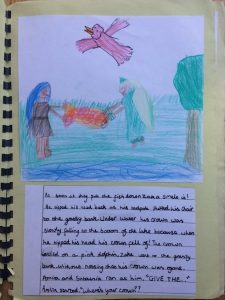 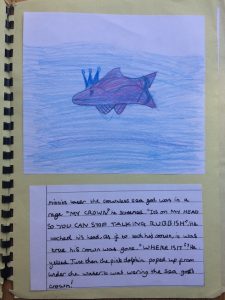 Minnits (minutes) later the crownless sea god was in a rage. “MY CROWN” he screemed. “Its on MY HEAD SO YOU CAN STOP TALKING RUBBISH.” He toched (touched) his head, as if to toch his crown, it was true his crown was gone.  “WHERE IS IT”? He yelled. Just then the pink dolphin popped up from under the water. It was wering the sea god’s crown! 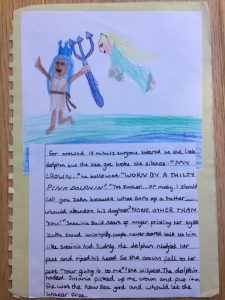 for arownd 10 minnits evryone steared at the little dolphin but the sea god broke the silance. “MY CROWN…” he bellowed. “WORN BY A THILTHY (filthy) PINK DOLPHIN.”

“Yes, Father… or maby I should call you Zaka because what sort of a Father whould abandon his daughter? NONE OTHER THAN YOU!” Sntainia said, tears of anger prickling her eyes.

Zaka stoud uncomptlby (uncomfortably), people never deared (dared) talk to him like Sntainia had. Sudnly the dolphin nudjed her feed and tipped his head so the crown fell to her feet. “Your giving it to me”? she whispered. The dolphin noded. Sntania picked up the crown and put it on. She was the new sea god and whould let the water free.

Here’s to my daughter and your daughter, and all the girls out there,