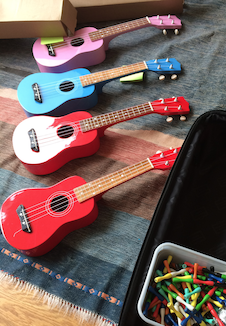 I did bring a suitcase of ukuleles to #OER16 in Edinburgh. It was as part of the BEST (Build Engage Solve Think) workshop I was running on learning networks. The workshop was based on the Open Source Learning Kit built by Mark Cabrinha. It was designed as a tactile tool that could represent the people, places, spaces, that were involved in learning, and through manipulating the pieces, and putting them together the user could create a representation of a learning network.

That sounds either very complex or really simple. Of course educators can design learning networks – we teach. But how often do you have the chance to really reflect on a big question and go through the different possible connections? Questions like:

…and after those questions are answered:

How do you go from you to those people or that place?

It can lead to interesting paths…

We didn’t actually have Mark or his Open Source Learning Kit with us in person, but as it was an 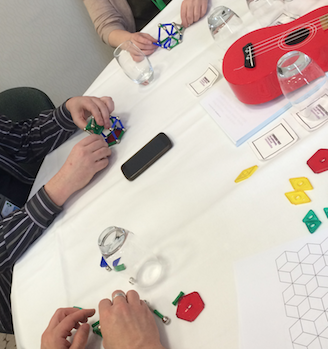 Open Ed Resources conference, we hacked it! I brought lots of magnetic rods, ball bearings, and different coloured plastic panels – red pentagons, blue squares, yellow diamonds, and green triangles (It sounds a bit like a sugar based cereal, but I promise it wasn’t!). We played and built.

It was good for me as a presenter, because I am usually very dynamic and it is possible for me to guide people, and for this activity it was very important that people were allowed time and space to discover for themselves. I had to step back so people could have space to think and explore. 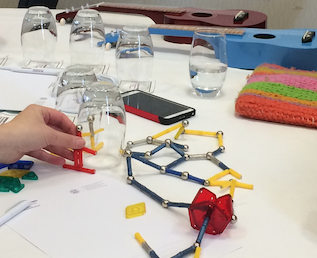 What about the ukuleles? Well, we’re coming to those – I had 8 instruments in 5 tunings. Fortunately the ukulele is pretty agreeable with being retuned, and I needed to plan so that people could actually play what I had in mind, even if people had zero previous musical experience. The different tunings meant that people could simply strum the open strings and they would be playing the correct chord – simple!

What I had planned was a demonstration of the need to work together – each person had an instrument and that represented ‘some’ knowledge that they had or had found – and although we were all physically in one room, if we played our instruments all at once, it sounded horrendous. You can trust me on that! 🙂 In order to make some semblance of music, we had to understand the information and the way in which it fit together. That required each of us to be confident enough with what we had to communicate it to one another – and with the ukuleles that meant strumming at the right time.

And when we did… well it made a recognisable (but not concert worthy!) version of ‘The Good, The Bad, and The Ugly’ It did produce laughs and really that is important too, when working together. If you want to see the workshop, there is a 30 min video of it embedded below (and if you can’t see the embed, there is a link). The format of the workshop involved an intro to the topic and task, time to work (which is mostly skipped in the video) a presentation of the creations, and then moved on to discussing ukuleles … If you just want to skip to the fantastic musical performance, the best run through is in the last minute. I am grateful to everyone who came and played along with me. I certainly learned from it.

If you want to see the original version of the Ukulele Orchestra of Great Britain playing the song, it is below. I love it, and it is certainly something to aspire to!