I got something to say. 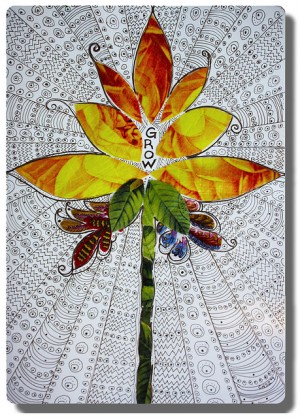 Every day is a journey in learning and life and this past year has been no exception. I remember starting a conversation in January with ‘what if…?’ – having no idea how things would take shape. Everything was a question, from funding to how the collaborations would spin out. At one point I found myself in California last May in a breakout group of a dozen people – age 9-45, students, professionals, -a real mix of life, in the middle of Yosemite National Park and one of those people was Nik Koyama (who is someone also fuelled by the same passions and cravings for life, growth, and connection). As we walked, Nik asked me about the collaboration that was happening and unfolding and Nik asked: ‘what do you want to do with this? where is it going? what are your goals? … for a couple of months or next year?’ and I without hesitation I said that it wasn’t about then, about where we haven’t yet arrived, about where we’re going – what I really wanted was to be here right now and to let that happen.

All we have is now. Each now, one after another, and there is magic in that. It goes back to so many things- belief (self-efficacy of course!), permission to learn, to experience, to explore, awareness, attention, reflection, connection, and all of these create value. Educationally as a teacher I continue to learn to trust my students and I give them more and more freedoms. Freedom to design their assessments, choose their focus, make collaborations, reach out and go beyond what I can conceive. There’s that old phrase – you know what you know. And as a teacher/lecturer/leader whatever someone wants to call me or you, we only know what we know and each of us is still learning. I love when students surprise me with new angles and discoveries. I have been fortunate to learn from great teachers, and still do-  because they are all around me. My students, the audience at my performances, the people on Twitter, my children – I can learn something from each one of them.

Last week I had the fantastic pleasure of having a good friend of mine (and yes, he’s my teacher too) David Preston, travel 6,000 miles to share and celebrate my book. That would never have unfolded if I hadn’t asked ‘what if…’ It was super fun, and fortunately my uni streamed it and gave me permission to put it up on youtube (thank you uni!). David’s talk is fantastic – and then there was my part with music, and the way I work is to put myself out there as openly and visibly as possible to show that whatever the talk, the theory – I mean it and I’m willing to do it. I may not be perfect, but that’s part of it – it’s about process and about learning and about the value and respect and making that real in learning and doing. After all what’s the point of waiting for that one moment when you ‘arrive’, when I’m learning all the way along and each of those now moments is a progressive arrival that stacks to build a part of whoever I am now. Few of us have had a performance where we honestly think – yeah, I’m done now. But this post isn’t about that event, it’s about two things that both came out of the event. 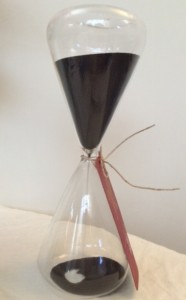 One was I was given a present. That is not wholly unusual to be given a gift at this time of year, but it was unexpected and very poignant. Here it is —->

I thought to myself, I’ve been given the gift of time. (yes, I actually have a melodramatic dreamy mind like that and I really did think that.) Besides being beautiful, you can turn it and watch it and enjoy the slowness of the sands passing, or also the idea of containment, and no matter how many times I start timing it – I never quite catch the end of it. It is a perfect metaphor – a former student, now professional has given me the gift of time. It brought me back to that now again.

The second thing was that a group of my students (the Musiquality bunch) said they would play a set of music after the main event, and I went over with my handy recorder and set it running for one of the songs. In the song, one of the students sang, and he had only recently done that for the first time (paralleling my singing in the event), and so when I recorded it, I didn’t intrude and left the machine on the floor and went back to the cupcakes and people. It wasn’t until later that I listened, and pasted it to the end of the video. -I don’t know the whole song, but it is perfect. I only have about 40 seconds of it – but it starts with ‘yeah we grow’… Yes indeed.

Have a listen (the embedded video starts there). Enjoy these 40 seconds of now. And sometime in the future, in another now, I hope to connect with you. As the story goes – I got a lot to say, and I’m sure you do too.