An appreciative word: Thank you.

This is a story of a connection that spans time, continents, and generations.

It started with a glance at my ‘others’ message box on facebook. You know, if you aren’t friends with someone (and yes, my security settings are that way inclined) then if they message you it stays hidden in this ‘other’ box without notification unless you happen to look. There was a very cryptic message in there. I am well versed in the issues raised by @jonathan_worth in this week’s #ccourses topic of Trust, and a message that seemed personal, but was from someone I didn’t know should ring alarm bells. But this was intriguing, because it had information in it that I hadn’t mentioned or even thought about in at least 20 years. It said:

I came across a copy of “Hope for the Flowers” with your autograph and was wondering if you remembered the book.

The comment was so specific that it had to be written by either someone who knew me, or someone who was extremely curious and picked up the book at a garage sale. At this point I wasn’t sure. 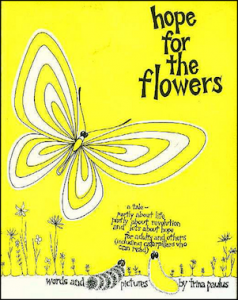 What is the book? It is a story of a pair of caterpillars who are basically running in the rat race of life, and they end up climbing on the hog-pile (caterpillar-pile) to get higher into the sky… and this involves stepping on others, losing any sense of vision, camaraderie, and openness to learning and becoming. In the end one of the caterpillars decides that he’s had enough and goes off. I don’t really remember the details, but I am sure it wasn’t easy to leave the pile and the routine, and it did involve courage and even loneliness, but then (you guessed it) he turns into a beautiful butterfly and is able to soar – and see above that rat race and actually be free.

So what the heck was my name doing in the book??? It was something my family used to give all of my teachers as presents – you know instead of a box of chocolates – and I would sometimes write something in the cover.

I was curiouser and curiouser. WHO WAS THIS??

I replied with something truthful, yet tentative:

…of course I do. glad it made it into someone else’s hands. That would have been from about 1983. We used to give it to my school teachers as presents…

It turns out I did write something and I was neither expecting nor ready for what came next:

Well I wanted you to know I have kept it all these years. I have shared the story with many others including my own kids. It meant a lot to me when I first received it. Still does. Trust all is well by you. I suspect you are still inspiring those lucky enough to know you.

…FYI, I kept the book because of the kind words you wrote. As perhaps the first written words of appreciation it has made an impression on me. Among other things, you taught me the value of showing appreciation. I contacted you to extend a belated thank you.

Yes I was sitting down. Yes I had tears on my face. No I am not good at receiving praise, and am guilty of preparing myself for people’s comments – armoured for criticism. This time I was completely unguarded, and it humbled me beyond words.

With more written exchange, I found out that this was from one of the people who came in to school to help with a club, and of course I remembered who it was. This particular teacher (yes, even though he didn’t run a class, he was my teacher) made an impact on me – coming to school to work with the individuals in the speech team, and in my case it was reading poetry. As a visitor to the school, he came without the judgements associated with how I did in other classes, or what friends circles I did or did not have, and he treated me as a valid person with my own potential. He wasn’t gregarious, and he didn’t lavish compliments, but acknowledged and encouraged. For me that was so liberating.

I remember writing in that book back in 1990. I don’t remember exactly what I wrote, but I remember that I meant it – and wanted to really convey something, as much as an awkward teenager can, of what it meant to be allowed to be me.

So why am I sharing this soppy sentimental story?

I have been a part of Connected Courses over the past month and have started to meet people involved in different aspects of education across the world, and we are being encouraged to build networks, and part of that is commenting. There has been encouragement from facilitators to get talking to each other, and I see the same encouragement mirrored within courses like ds106 and #phonar where there are healthy communities of conversation and connection.

For many people this is daunting in practice – for example sometimes I feel that I don’t have the expertise to comment on these well established, flash-bang people’s writing – that it might show me as thick, or inexperienced… or I just wonder if I have anything of value to say.

The truth is we don’t know the impact of our comments, now or in the future. I certainly would not have thought that my comments could possibly have meaning for my teacher, but they did.

…As perhaps the first written words of appreciation it has made an impression on me. Among other things, you taught me the value of showing appreciation…

So to that teacher- you taught me to glimpse myself, to not hide, and to be free to speak. Who would have thought that of the many teachers, the one who helped at the after school club would have an impact so great. In my life speaking to people through teaching is a large part of what I do, and few people are actually trained in how to do this. I am very thankful that you were and are my teacher.

and for old times sake… I recorded one of the poems you helped me learn.

The Box, by Kendrew Lascelles

I still have them all.