The picture not taken

This morning on my run I often take pictures and post them (here), but sometimes I see something and want to take a picture, but just cannot bring myslef to do it. This morning there was another of those – the picture not taken. It wasn’t because I didn’t have a picture taking device; I had my phone (aka personal camera & computer) in my hand. It was because I just couldn’t bring myself to break the perfect scene and interrupt someone else’s moment by invading with my gaze.

It doesn’t mean I didn’t notice. I did. The pictures not taken have burned their images into my mind and made a memory. I’d like to describe a few of them and maybe you will be able to see a shadow of the moment in your mind too. -they are all scenes of the summer, and that means they are endowed with a little bit of magic.

1. The woman reading in the van, and her dog.

As I run, I go around the water’s edge for a mile in one direction and then I stop and look at my favourite tree – a big cedar, and I imagine it tells me of all the things it has seen, knows, the long view, and then I run back along the water’s edge. There is a stretch where sometimes people sit on benches and sometimes people park cars – maybe just to have a look, or to have lunch, or if the tide is right to sleep for the night (even though you aren’t supposed to do that, really).

This morning there was a van in that place, blue – quite like a Volkswagen camper van, but not that make of car – it was just ‘van’ shaped and had been converted into a camping style van. All the doors were open, front passanger door open and I could see the seat had been made to face the reverse. The back (full) tailgate was open, and the side sliding door. As I approached the first thing I noticed was one shoe – a leather sandal – on the road, on it’s side like it had fallen down, and it was impossible not to notice as I ran past – the other shoe was on the step into the van, and just past the shoe, as my eyes followed up from the road to the shoe on the step, they were drawn up a bit further to the curious eyes of a black and white sheep dog, lying on the floor, hair falling neatly onto the floor almost as if it were groomed that way, and one paw delicately folded back and tucked under the dog’s body. Elegant, and endearing. I could see the edge of a bed with fluffy blankets covering it.

I ran on and did not look inside.

Coming back I was facing into the open tailgate and even not looking, I could see the perfect scene. A woman lying on top of the bed, propped up and reading a book. Mid-length shorts and a vest top, looking utterly comfortable and without awareness of the world beyond her book and her dog – not even awareness of the shoe on the ground. Perfect.

Sometimes I run the other way, instead of going toward the tree, I go toward the village centre. Here that means a church, a sailing club, and a public meadow at the edge of the water. Just like every village, right? -I know, I am incredibly fortunate to be dropped like a pin at this place on the map and to call it home. Going this way generally is more pleasant to do walking because there is a sidewalk up above the water that backs onto all the houses, and there are such lovely gardens. It is a shame to go by too fast and not appreciate the changing flowers or notice the bees or the sun on the water. So I was walking.

The gardens are separated by a small wall, which is enough to imply privacy – it is only waist high, made of traditional flint and brick. Occasionally there is a taller pillar on either side of a small (waist high) wooden or decorative iron gate to the back gardens, and there are plants – beautiful flowering things. Hollyhocks, roses, clematis, budlia, hebe, allium. It is both exotic and exquisite, and at different times of the year, the view can be slightly obscured around one of the pillars.

This was one of those times, and I could see the legs of someone sitting on the wall: a floral dress hanging to a couple of inches above the not so slender ankles, which were crossed in a comforgable way. As I approached, I could see a grey mop of curly hair bent over a book. Her solid, yet feminine hands held the book deliberately as she poured over it. She too was completely absorbed – absorbed in the book, absorbed in the wall, one with the scenery and perfectly placed for the setting sun to light her pages.

The flow of people past her was completely natural, walking along the tirppet path (that’s what the sidewalk above the sea is called). To stop and take her picture would have broken that – mood, the magic, maybe even disrupted the sunshine – and I couldn’t, but I did smile and took that smile with me.

3. The boy and the bench

On the meadow by the sea there are benches dotted about that look out. It is not open water, but instead imagine a hand, where the hand is the water and the land is all around. This village harbour looks out across one of the fingers of water to other land, and the water leads out to the bigger water and that leads out to the English Channel. We do not have very rough water here, but we do get the weather – and the wind. On this day there were quite gusty, yet friendly winds (35mph or so) and there was a family near the wall. A young boy, maybe 7 or 8, had climbed up on one of the benches and was standing with arms outstretched, taking in all the wind. His shirt was puffed and his medium long hair went every which way, and he laughed.

I was walking across the meadow, coming from the church end toward the sea wall. Every night I walk there and see the sunset, and this night I was greeted with this vision of playfulness. I *almost* took a photo, because I could catch him from the back – it would just seem wrong to take a child’s photo without permission, even in a public space – but his sister was running around the bench chasing their little jack russel type dog as it ran around and enjoyed the evening too. It was a scene – and I breathed it in, my hair mimicking his and sunlight on my face too – but I did not climb onto the bench. (not this time at least)

This was his view, and what he did – standing up there, arms out, and laughing was perfect. 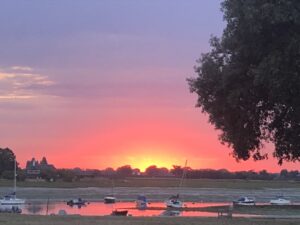 For now, I’ll close my eyes to see those pictures, and smile.

Here’s to noticing, and sharing moments, even at a distance, with people. -and I’ll stick to the pictures I know I can take without disturbing the moment  – like the sunrise over the field. At 5 am not even the birds mind me there.