Dear Orchestra, I love you. There are many things that we do in life, and this is one of my best. It’s funny how these things make themselves manifest. Every week I meet with a group of people who come together to form an orchestra and we enjoy learning and playing. We make music. We are an orchestra. I know very little about the people. I have no idea where they come from, what their jobs are, if they have jobs, what they believe, like or dislike, what they eat for dinner, what they do or have done in their lives, and yet we do amazing things together.

Last night was our concert. It is nice to recognise where you are and a concert is a way of doing this. We framed it as an informal playing of our pieces: anyone can come, it’s free, we all bring food and drink to share, and we make music. We were in the University Chapel, and I had (not so) jokingly told everyone to dress warmly as the main preparation. Where we are it’s winter, and although it is not sub-zero, the winter in England is cold and wet, and it gets in to your bones. The Chapel is very beautiful, but it is a big, big space with two giant stained glass walls that was built before people thought of insulation or heat retention, and let’s just say that heating is a challenge. There was no problem last night – the place was packed and with 100+ bodies in the audience it was toasty.

Our policy is that anyone can come to be part of the group and basically you turn up when you can and when you want to. Something must be going right because we had 46 people listed as performers on the programme.

What’s so special about this group?

We do it. We make music and it actually sounds good and it’s not conventional and it’s not your usual group makeup, and sod that, we do it anyway and I have not remembered a more purely joyful collaborative concert experience in a very long time.

We have saxophones (who actually save the day more often than not) in the group. We have 5 flutes and 9 clarinets, as opposed to the traditional 2 or maybe 4 in an orchestra. Dorothy is a killer percussionist who even bought her own cymbals for our Tchaikovsky and next term is going to debut on drum kit. Hubert and Eunju bring their daughter to every rehearsal and she is amazingly patient and sweet. Ray and Mark have taken on arranging songs they want to play with the group and next term we’ll see two of our violinists play a solo, Bach Double Concerto, with us.

There’s music in the air like moisture waiting to form clouds and blow across the sky in wonderful formations – making patterns, giving breeze and shade, and bringing storms as well as rainbows. We bring people together to form those possibilities, and last night we made it happen.

It wasn’t about right notes or perfection. It was just about growth, being a part of, and letting music be the medium that carried us and the audience. And what an audience – it was a full house! The things that people said afterwards were not about how theme A was presented with care and made such a contrast to the B section and weren’t those keys in the development a surprise! No, they said thank you for giving my family such a wonderful evening both experiencing the music and performing. That was beautiful. See music is all the more meaningful when it starts with meaning, and here it wasn’t primarily about the sounds, but about the accomplishments, the audacity of someone to believe that after however many years of not playing they could do it again, that even though they never did a grade whatever or maybe never played with others that they could. You can. You bloody well can, and I’m not going to tell you otherwise. I am going to do everything I can to find a way to help you to do it. -and no, it’s not perfect, but neither am I. My goal in life isn’t to be perfect, it’s to be with people. This music had meaning because everyone in the space cared about each other and collectively worked to make it come together. I wanted to somehow thank the orchestra, so I did one of my odd-ball things and made them all cookies in the shape of them. Orchestra cookies J You can see the trumpets, clarinets, oboes held out to the side, bassoon, contrabassoon, sax, and the strings… Somehow a little gesture of being willing to spend time thinking about each one of them (and producing something yummy) seemed a good way to say thank you, to celebrate each one of them.

After the concert there was such an air of genuine happiness from all. I heard from one of the players that the musician next to them had turned to them after we finished performing and said – that was really lovely. They all came to hear us. -and the first person said to me, in relaying the story, ‘It’s a bit like a children’s nativity where the parents come and their child is just the best thing, but for us we’re adults, and we were the best thing for our people, and that is really special.’ They are 100% right. It is special and such an important thing to cultivate in life. Celebrating others is the best.

Here’s to the next year of music making. Thank you ECCO Orchestra. I do love you. 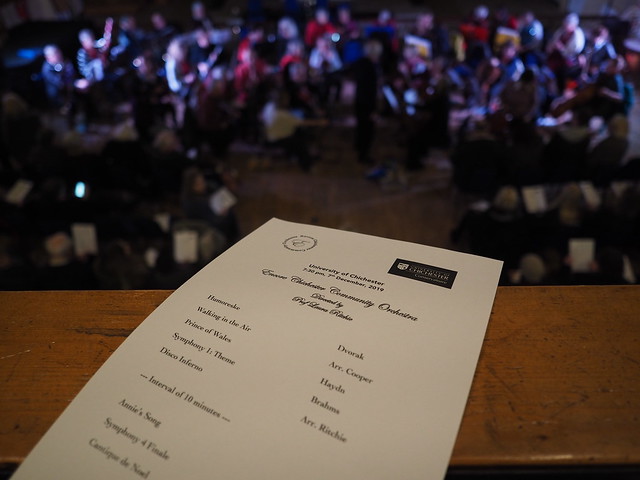