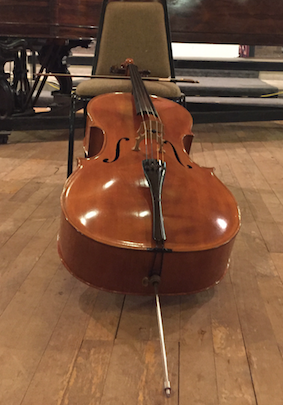 Last night I had the pleasure of performing a recital accompanied by my friend and colleague on the University’s lovely 1876 Dancy D Steinway piano. Oh I love my cello and I love to play for people. Performing for me is interesting because I am trained to do it, but in life I do many other things as well and this kind of solo performance is a slice of the pie. Finding balance is a quest. (recordings from the concert are at the end of the post, in case you want to skip the reflective part!)

In my day job I teach (university classes) and I research and I write and I am working on collaborative projects and teach cello and the family and life and and and. There was a time when I could say ‘I play the cello’, and that was the end of my list. I would wake up in the morning and play the cello, with breaks for eating and sleeping, but mainly I played the cello. Some people are both skilled enough and carved out of whatever sort of stuff is needed to do that for their whole lives. I imagine it is a slightly solitary thing to do as there is so much practice, and that is not generally a social thing. I indulge in immersive practice in preparation for concerts, but truth be told, if I’m writing a book, there may be months when I don’t touch the cello. Balance…

As I’ve grown (yes I’m still growing!) I have learned to do cello better and more productively. A simple example: before having children I could practise all day… .ahhh! After having children there were mouths to feed and diapers to change and minds to nurture, and I learned to work more effectively with my time. I continue to learn how to manage time and how to listen – much of practising has to do with knowing your goals and understanding the possible ways to get there. It also has to do with listening and reflection. I have learned to listen to others, to students, teachers, colleagues, and others. I have learned so much from performers across instruments and also from those who are not musicians, by watching their processes and learning to transfer elements of what they do to my own learning and expression.

Finding that balance to learn effectively and produce something that I can be pleased with is always a challenge. If for no other reason, performance is live and the moment is here and then it moves on. Whatever happens, happens. One chance to play it or say it. After the concert last night I commented to my colleague who played piano with me (I didn’t want to call him accompanist, because really he does more than that) – I wish I didn’t take time to warm up to the situation. (It is a tricky venue as there is no real ‘green room’ and you are with the audience just before playing, and during the interval – mixing and talking and then BOOM! it’s showtime. Those transitions require focus and it can be like going from fifth gear to reverse in a few seconds. Musicians struggle with aspects of performance whether they call it nerves or whatever. I had a watershed moment that it probably has to do with revealing something. (ephemeral, personal, ineffable – don’t know what to name it) After I had asked that, he said to me, do you take time? and then … well there is a moment when there’s a sense of ‘oh, what the hell’ and then you start to have fun. He went on to say, ‘sometimes you have to get off your knees and stop being afraid [of the music/performance].’ And you know, what? HE’S RIGHT.

It is all minutiae, splitting hairs, and if you didn’t intimately know my playing you might not notice it. but I did, and upon reflection it is something that happens in other situations too – with singing, with social situations. Perhaps it is a deeply held reflex type response to potential danger of exposure or maybe judgement, and having identified that actually the audience is friendly, maybe that’s the moment I decide they can be let into the music in my mind. Anyway, I’m working on it. I am big on process and on exploring learning in the open, thus my writing about it.

This was a fundraising concert where we were fundraising to buy a viola for the University as part of a musical instrument library. We were aiming for £1,000 and I am pleased to say we exceeded that goal. Hooray! Recording the event was done quickly: I stuck a GoPro a chair in the front row. (yes the front row was literally 2 feet in front of me- I could have tapped the shoe you see in the video with my bow)

I’m interested in thees performance processes and how I can get better at them. I have another concert in February, for which I need to prepare a different programme. I’m considering documenting the learning process (with new music). This wouldn’t be like the lovely famous people who participated in the #100days tag on instagram. Here people committed to recording their practice for 100 consecutive days, which is quite laudable. The posts are great, but not without effort. Hillary Hahn said she spent a half hour per day editing her one-minute clips. If I record practice and learning, it will be something much more at the coal face, about learning new repertoire- really showing all the steps. We’ll see if I’m brave or crazy enough to do it. I have been experimenting with the multi-camera functionality of the university’s lecture capture software, and it’s possible to show bowing or fingering in fun ways. Anyway, that’s for the next project.

Here are snippets of the concert last night. Don’t worry if you hear a glitch, I promise those blips aren’t long. I was pretty pleased with the balance I found, and very pleased to have Ben playing with me. 🙂