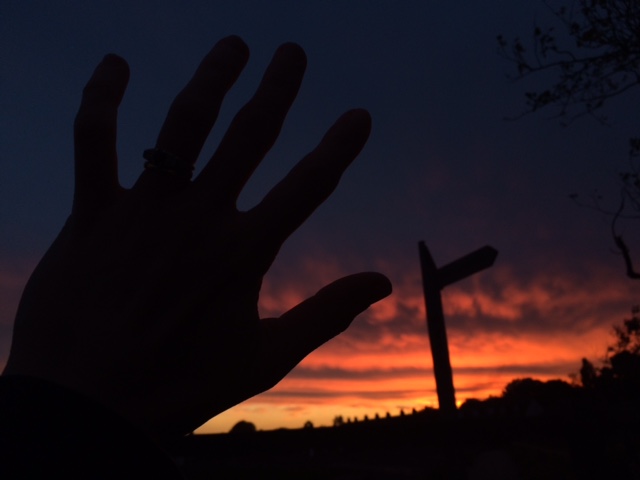 The question was posed to me: 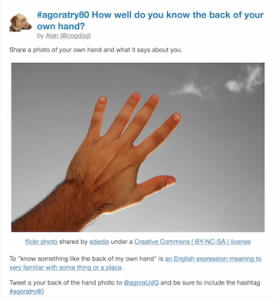 It was a daily prompt in a project to get people connected through technology (that is a huge under-simplification of  the AGORA, web-associated activities connected to the University of Guadalajara (UdG) Student Centred and Mobile Learning Diploma). Although the Daily Try was created as part of the project, it is wide reaching and open to anyone. I have dipped in and out of it this summer and looking back at my collection of Daily Try entries, they form a positive scrapbook of reflectivity and storytelling.

So the back of my hand? I thought you would never ask. This is my left hand, and it is in shadow because it will never be classically beautiful like my grandmother’s (she was a hand model in the day when mannequins were live people). That is primarily because I have cello fingers. To play the cello, short nails are a must, and if you had a better view of my thumb, you would see a callus on the side of it from playing as well – If I play a lot the ends of my fingers look like little frog’s fingers. It sounds odd, but it’s not – promise.

Then there’s the ring. Well two rings. You probably can’t see them in the photo, but that’s ok- the story isn’t about what they look like. One has been there 18 years and the other a bit longer. The engagement ring was not bought (I am a very big fan of passing on/lending/giving things to others, and have been lucky enough to be on the receiving end as well). This was one of those stories- In short the ring was hers: 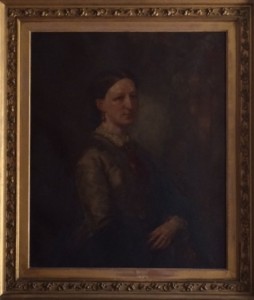 She was Laura Anne, some semi-distant ancestor of my husband. She was not a great woman in history, but we do have her story and she endured many things- including spending weeks on a fishing boat and giving birth at sea sometime in the mid 1850’s. The ring itself was falling apart (lost the main stone down the sink drain in the loo at the Royal College of Music!), but it got cobbled back together and I love that it was hers and that I can carry on that story. Someday some ancestor of mine might take it out of a box and say to their child – do you have a ring? would you like to have/give this one?

on the back of that story, I commend the Daily Try to you.