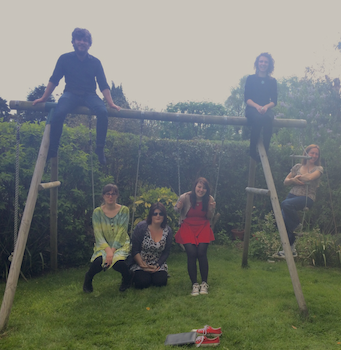 The project that has become Musiquality is actually hitting the road. I jump on the plane in two days, followed two days later by the other 5 in the group. When this started back in September – as a fleck of excitement in a skype call – we had no idea where it would go and I think the best bit is that we actually had no idea. Nobody involved has put limits on this venture. If there are rules or criteria, often people work to them which can be good, but they can also turn into limits. For this, there was never any doubt that people were committed and so there was no need to put some sort of basic requirement on it, and instead it has truly blossomed beyond what any of us could individually imagine.

I have approached the whole project as a collaboration. I am not the ‘teacher’ and in fact my colleagues are as much teachers in this as I am. It is slightly unusual in that the other 5 in the group are actually completing their third year at University, so technically they are students, but I class myself as a student too, and I have learned so much – and been fully supported by the others so we as a group could create and learn together.

For anyone who has followed the few updates I’ve posted you’ll know that this has been a roller coaster of a venture where we all tested our edges and pushed boundaries. I initially funded the students’ plane tickets and they paid me back within 3 weeks – fundraising their socks off! None of us knew each other very well before we started this – we were in the same lecture (me on one side of the fence and they on the other! -and the ‘students’ didn’t know one another either.) So, as a group we have continued to work at it, because the learning and collaboration is something that we really really believe in. Going out to make connections and bring quality and smiles through music is in itself a worthy cause. Over the course of the month leading up to the actual trip, people have begun to come out of the woodwork and say- can I join in too? YES! The plan is not for us to produce the most perfect or innovative music that ever was, but to create music with others and for them to genuinely feel a part of it.

We had our first outing on Wednesday evening at the end of year BBQ at Uni, and it was great. I am not saying we were note-perfect- but it was a great coming together. Two of the players came running from an orchestra rehearsal (they had a concert later that night) and I had my challenge of singing a song – first time in public like that since I was 14 (!) and we were playing to the head of department, the other staff, and the students. We have the most supportive environment and community. We still have lots to learn, and every time we play it will be different – as new people will join in and add something new to the mix.

Here’s a snippet of what we performed the other night:

Our first stop on the Don’t You Quit world tour (well, California tour) is LA, where we we are looking forward to having one of the Asst. Deans join us on the stage to perform at UCLA- (it might be on the racquet ball court, or on the beach – we’re not sure yet, and we’re not picky!). Next stop is Yosemite, where we will be joined by 20+ High School students, 2 of their teachers, a prof from CalPoly, a few extraordinary alumni from Righetti HS, and a handful of parents and children. For four days we will live and learn together, making and playing music, and exploring the wonderful setting. (For me that is going to be a very special drive up north, as it is the land that my grandfather helped to map back in the 1940’s and it will be my first visit to Yosemite.) One of the High School students has sent us the beginnings of a song he has written that we’ll collaboratively finish and perform. We hope to have a supply of extra instruments to share with people, to give that magical experience of creating music as an orchestra. Finally we have a house concert in Santa Maria. We’ll see how it all pans out. There will be challenges and opportunities for everyone. I’ll be posting updates and tagging them #Musiquality. Hope you follow along and chime in along the way.