The man, the keys, and the cup of tea 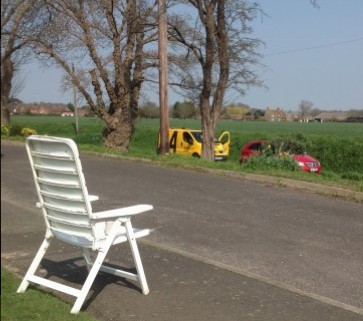 This is one of those posts about something that really happened, it was just yesterday –

There was a knock on the door and I opened it to find the postman asking me to sign for a parcel, and I noticed a car stopped in the road (we have a sort of drive that goes above the main road, and we can see the main road from our house) and there was an older gentleman explaining to the police that he had locked himself out of his car. I thought, ‘ah, poor man. What an unfortunate thing to do…’ and went back in the house. A good hour later I happened to walk out of the front door, and the man was still there ! He was leaning on his car, standing, with his head resting on his arm leaning above the door of the car and he looked really weary. I went back into the house and thought ‘poor, poor man. I should do something.’

I went out there and asked him – I said:

Excuse me, are you ok? I overheard that you locked yourself out of your car a while ago, and you’re still there. Would you like a glass of water, cup of tea, or a marmite sandwich or something? Would you like a chair?

He looked so pleased and said:

Actually a cup of tea and somewhere to sit down would be wonderful.

It turns out he had a cup of coffee in the car and it spilled. When he stopped to shake the spill off his newspaper, as he shook- the keys slipped out of his hand and into the car, and as he turned, the door shut and autolocked with the keys inside!

It was so easy. But before I said anything to him, after I saw he was still there, I went back in the house and for half a minute I wrestled with myself – oooh, I really should do something, ah, but you don’t just invite strangers to lunch do you? -that second thought didn’t last long, because sometimes I do just invite strangers to lunch- in a matter of speaking. I did what I would want someone to do if I was in that situation.

So out came a garden chair and a cup of tea and that man stopped leaning wearily on his car, and I brought him a pencil and he did the crossword puzzle while he waited and kept watch. First the AA car rescue people came, and then they called in a locksmith. I guess all electronic newish cars are hard to break into without damaging them. There was of course an hour wait  for each of these people to arrive. Good thing it was a nice day out! I came out to chat to him and make sure he was ok, and I said that if they finally fixed it and I wasn’t around, it was fine for him to just go. And in the end (nearly 4 hours later!) he did.

The magic of the story is that neither of us ever knew the other’s name. His wife was having a reunion with some people she had taken a course with at the university where I teach, and it would have been easy to say – oh I teach there, I’m blah blah blah, but giving him a rest and a drink wasn’t about me, and it was delicious to think that I could be remembered as a random nice stranger.

So to the man in his little red car, I hope your wife believed your story when you eventually picked her up, and I hope she wasn’t cross that your shopping trip took a *little* longer than expected. Safe journey home.